During a recent visit to Kolkata, our committee member B P Bhattacharya ("BP") was bestowed one of the highest accolades awarded by the Royal Sikkim family. The award was given for services provided by the Bhattacharya family over many years and was gifted by Hope Leezum Namgyal Tobden to BP at a private ceremony held at the Oberoi Grand Hotel in Kolkata on the 16th of September 2021.

The Maharajkumari of Sikkim, Hope Cooke Namgyal, an American visionary who married the King of Sikkim in 1961, appointed BP's late father, Kali Pada Bhattacharya as a special adviser, a relationship which continued after the Maharajkumari passed away with their daughter Princess Hope Leezum Namgyal Tobden who was born in April 1968 . When his father was alive and subsequently, BP recalls regularly attending meetings with the Maharajkumari and his father at the Grand Hotel and taking notes. The relationship between the Royal Sikkim and the Bhattacharya families still continues today. As recognition of the work BP's father and himself contributed to the Kingdom of Sikkim at the time, the accolade was manifested by the giving of a scarf to BP, who also became an honorary Sikkimese citizen. Quite an honour! 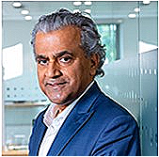 After 32 years with bp and over a decade as a member of the executive team, Dev Sanyal has elected to leave the company.

Dev's strategic and commercial thinking has been instrumental in shaping bp into the company we are today.

I want to draw out a few career highlights that some of you will be aware of.

Firstly, in his role as group treasurer, following the Gulf of Mexico incident, Dev's commercial instincts and ability to get things done helped bp secure crucial funding. It was essential to keep bp's operations going and to give the world confidence that we would survive and re-emerge as a better company. Dev's personal resilience and dedication are hallmarks of that time.

More recently, Dev has focused his efforts towards building bp's low carbon business. In 2017, his vision led to the creation of the Lightsource bp partnership - something he personally negotiated. It was a deal that created a blueprint for entering and scaling up new businesses. Since then, it has grown ten times over and now has a global development pipeline of roughly 20GW. He has also led the formation of our offshore wind business from scratch, creating partnerships in the US and UK to capture 7.4GW of capacity. Dev played a significant role in the creation of bp Bunge. It is now the second-largest bioenergy business in the world and employs over 10,000 people. In addition, in a short space of time he has built growth businesses in hydrogen and gas and power in Brazil, UK, Europe and Asia.

Last year I was delighted when Dev agreed to join my newly formed leadership team to lay a solid foundation in the gas and low carbon space. He did exactly that - and more.

As well as being a shrewd businessman with great commercial instincts, Dev has always been passionate about nurturing and providing opportunities to diverse talent. His current team is evidence of this passion. Throughout his career, he has led with conviction, calm and grace. He is a true global citizen and has held many key external relationships across government, academia and business.

Whilst I am very disappointed to see Dev leave, I am equally delighted to see him take his career in a new and exciting direction. His external role will be made public later today and his successor will be the subject of a separate announcement.

Dev will leave the company at the end of the year and has kindly agreed to hand over his responsibilities through the middle of October. Personally, I have been fortunate to work side by side with Dev for 15 years. I have relied on his insight, learned from his enormous experience, and appreciated his personal friendship.

We wish him, and his wife Katerina, all the very best for their future. We shall miss him - but not forget him.