Please browse through these pages for details on the committee members.

He has been deeply involved with the welfare of Tibetans and Tibet over many years, spanning the time when he was a master at St. Paul's in the early 60s. He is a former Chairman of the Tibet Society of the UK and is the Goodwill Ambassador of the Tibet Foundation whose Patron is His Holiness The Dalai Lama. He recently wrote an interesting article which can be read here.

We are delighted to announce that John Billington has agreed to become our next Patron, following on from David Gibbs.

John, a graduate of St Edmund Hall, Oxford University, came to St Paul's in August 1962 from England. He had been teaching at the Cathedral Boys' School, Bombay, from 1958 to 1961, and so was by no means a stranger to India. As a teacher of English he was among the finest to work at St Paul's: dedicated, conscientious and imaginative, he earned the lasting respect and admiration of boys and colleagues alike. He threw himself into the general life of the School with immense enthusiasm, taking part in all the games, running the play-reading and music circles, helping with the Scottish country dancing club, painting scenery for three school plays, organizing charity shows in aid of the local Tibetan refugee children and in 1964, heading Havelock House. His energy, his skill, his thoughtfulness and his quiet charm endeared him to us all.

John himself recalls that "I first met Leslie Goddard in the winter of 1959. I was teaching in Bombay at the time and had visited Darjeeling. I met Mr Goddard, by chance, at Tindharia where he was staying near the station -- to write your reports! We got on well and after I had played cricket with Kancha's little boy, he asked me to join the staff at St Paul's immediately. I couldn't do this as Istill had 18 months to go on my post in Bombay and although I hadn't signed a legal contract I was reluctant to breach my moral duty to complete the 3 and a half years expected of me in Bombay. He accepted this. I returned to Bombay but decided that I would move to St Paul's when I was free.

Meanwhile the teacher with whom I shared a flat in Bombay got into trouble and left the school. Although he was a teacher of French I wrote to Leslie Goddard recommending that he was well worth interviewing as a teacher of English. Goddard duly did so and accepted him since he had
a vacancy for an English teacher and I could not join yet. The teacher was James Clarke!

This was the start of a major migration of staff from CBS (Cathedral Boys' School) to SPS. My reports to my colleagues followed later by James' endorsement saw O.A.Gregory, Mohan Rao, Mr Joshi and Mr Upadyaya all move to SPS. So although I was not able to join SPS myself until 1962, five of my colleagues from CBS (who were not tied to contract) ironically got there before me. I joined in '62 and was there for the Chinese invasion of the border and stayed there until the end of 1964, leaving in early '65. By this time I had been in India for seven years and decided that I needed to get recognised in the UK as the policy of the Indian government was to replace ex-patriate staff with local staff. The replacement had started of the tea-planters and I could see the direction of travel. I overlapped with David Gibbs and he wanted me to stay but although I liked him, I decided to stick to my plan of returning to the UK to get recognized in the UK system.

I remained friends with both Goddard and Gibbs until they died and visted them regularly -- and with James Clarke and Judy Goddard also. And I'm still in touch with Mohan Rao. When I retired from Repton in 1996 I visited Darjeeling annually for the next ten years as a Project Manager for GAP (a charity placing young people in schools and Tibetan monasteries in India). I subsequently discovered that Repton's connections with SPS went back much further than David Gibbs. I'll
amplify this some time!"

We look forward meeting up with John in the future, especially at our future Annual General Meetings and Reunion lunches. 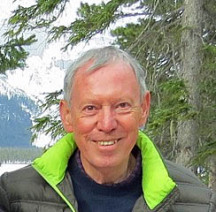 Gerry Elloy, elder son of Malcolm and Nora, was a pupil at St. Paul’s School from 1951 to 1963. Malcolm and Nora were long standing members of the staff at St. Paul’s. They first met at St. Paul’s and some years later were married in the Military Church in Jalapahar on 29th July 1944, with a reception at the school. Nora taught in the Junior School and Malcolm became Headmaster before finally retiring from the school in 1963. Gerry completed his Senior Cambridge in 1962 and remained on to do the first year of Higher School Certificate in 1963. When his parents retired to Sussex, England, at the end of 1963, Gerry continued his schooling at Hove Grammar School completing his A Levels.

On completion of his A Levels, he went on to The City University, London, where he studied Aeronautical Engineering. On graduation, he joined the Royal Air Force (RAF) on a five year Short Service Commission. Basic officer training was followed by an Applied Engineering Course at RAF College, Cranwell. He completed his service at RAF Coltishall, Norfolk, working as an Engineering Officer on a Lightning Fighter Aircraft Squadron.

Following his service, he moved to Sussex with his wife Betty and went to work for a leading Flight Simulator Manufacturing Company. He worked in several “flight” design roles and finally retired after several years as the Flight Team Leader, responsible for all aspects of Flight Systems in the Flight Simulator Manufacturing and Support lifecycle. In his role as Flight Team Leader, he represented the company at international level with the formulation and writing of the European (JAA and EASA) and World (ICAO) Flight Simulation Regulations.

Gerry and Betty retired to Leicestershire in 2014 to be nearer their daughter Marianne who is a Consultant Surgeon.

Gerry has been a member of the Royal Aeronautical Society (RAeS) for fifty years and continues to maintain his interest in aeronautics as a committee member of the RAeS Loughborough Branch.

Please see details on next page.

And David you are a most worthy successor and will bring considerable strengths to all we do and thank you for agreeing to do so . You will have all our support I am sure.

See you all soon

Zarir Cama started his banking career in 1967 and joined the HSBC Group forty-three years ago in 1968. After two years training in London, he returned to India and worked in various operational, credit and branch capacities. He was posted to the Group's Head Office in Hong Kong in 1982, and then to HSBC's associate The Saudi British Bank in 1988 where he finished as Deputy Managing Director.

In 1992, he worked again in the then Head Office in Hong Kong and later at HSBC Holdings plc in October 1993 in the Group's new Headquarters after the acquisition of Midland Bank PLC.

He moved to Malaysia as Deputy Chairman and Chief Executive Officer HSBC Bank Malaysia Bhd in November 2002 - the first Asian to hold this position.

In June 2007, he came back to the Group's Head Office in London to set up a new International Division overseeing the Group's business worldwide. In 2009 he was given overall responsibility for the Group's Continental European business comprising 19 countries in which HSBC is represented. On re-organising this area, he moved in February 2010 to what is his last role –

He retired from the HSBC Group at the end of 2011 after 44 years but will continue as a Non-Executive Director of HSBC Bank Bermuda Limited, The Saudi British Bank (SABB) and HSBC Private Banking Holdings (Suisse) SA.

He is a committed environmentalist, a passionate conservationist and an advocate of the Arts.

He was the moving spirit in marking HSBC's 120th year in Malaysia and the release of its anecdotal history "HSBC Its Malaysian Story" and has also been responsible for the publication of two histories of personal experiences during the Japanese occupation of Malaya in WWII. Whilst in Malaysia, he initiated and completed the restoration of "Suffolk House" in Penang - a unique Anglo-Indian style mansion which became the seat of Government during British times.

He was conferred the Darjah Setia Pangkuan Negeri (D.S.P.N.), which carries the title 'Dato', by the Governor of Penang in July 2006. In April 2007 he was conferred the Dato' Paduka Mahkota Perak (D.P.M.P.) by the Sultan of Perak on the occasion of His Majesty's 79th Birthday, the only foreign banker to have been so honoured twice.

In London, he is on the Committee of the British Malaysian Society and the Royal Society for Asian Affairs. He is a Trustee, Director and Vice-Chairman of Asia House, the only such organisation in Britain which embraces and promotes the Century of Asia as its core value. He has recently been made a Trustee of Britain's National Youth Orchestra and is also Chairman of a Trust set up in the UK to help villages in India and is a Trustee of Pratham – a UK based Trust which promotes education for underprivileged children in India.

In the UK, he is a member of M.C.C., The Royal Automobile Club (RAC) and The Oriental Club.

Zarir Cama was born in Bombay, India on 26 May 1947 and educated at St Paul's School, Darjeeling and St Stephen's College, Delhi. He is married to Shelialla and they have two children, Nyresa aged 28 and Yashan 25, both of whom currently live and work in London.

Arindam Chaudhuri studied medicine as an undergraduate and postgraduate at the Calcutta National Medical College, moving to the UK thereafter and passing both the traditional and specialist FRCS examinations. He trained in the East Anglian Higher Surgical Training Scheme based out of Cambridge, and is a Consultant Vascular Surgeon at Bedford Hospital NHS Trust. He is a Fellow of the Royal Society for Medicine. He maintains the all-round interests that were developed in school, is Associate Editor for the European Journal of Vascular and Endovascular Surgery, and still plays squash and some bass playing duties with local bands.