Keep up to date

David and Sally Gibbs who celebrated their 66th Wedding Anniversary !! 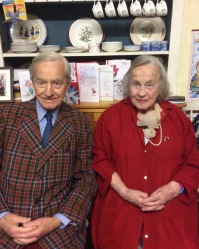 We extend our Warmest Congratulations to David and Sally Gibbs who celebrated their 66th Wedding Anniversary with family and close friends on February 10th. Cindy Gibbs write to say that they greatly appreciated all the messages they had received and David also loved the messages he received for his birthday last July.  He has not been able to reply to people basically because of his age but he has really enjoyed reading them all and reviving happy memories.

This happy photograph of David and Sally was taken on their wedding anniversary earlier in the week.

The 2012 Reunion Lunch for the Old Paulite Association (Europe) was held at the Bombay Brasserie Restaurant in London on the 21st July 2012, one week ahead of the start of the Olympics. It was preceded that morning by the Annual General Meeting held at the same venue.

The AGM started at 10.15, and there were seventeen attendees. This included our President Ken Pearce and the full complement of Committee members. And it was a pleasure to welcome the most senior OP at the Reunion, Colin Shaw who first went to St Paul's in 1937, Dwarka (Tutu) Bose and Gora Laha (SPS in the late 1940's and 1950's) visiting from Kolkata, our Auditor Fazle Khundkar (also 1950's) and Rabin Pandey ( 1990's,and helping bring the average age down!). Tutu and Gora were later to go with Ken Pearce to enjoy several Olympic events. The AGM was skilfully chaired by Zarir Cama, guiding the enthusiastic, full and frank debate. The discussion and several suggestions will be reported in the Minutes.

The meeting concluded at 12 noon, and by now the Lunch attendees were streaming in. We were expecting 131, and in the event we saw 130 which is one of our largest gatherings, certainly in recent years. The Bombay Brasserie comprises a bar area, a dining area and adjoining this, a light and airy conservatory. The conservatory holds 106 which we filled and spilled over into the dining area. Guests were greeted by my wife Jill, handing out name tags (with a picture of the Chapel and Kanchenjunga), and a drinks token. With the greetings between long lost friends, and introductions to new acquaintances, it took a while to get everyone to their 14 allocated tables. Before people started on the serious business of enjoying their lunch I made a short speech of welcome. We were delighted to see so many OP's, family and friends, ranging over seven decades from Colin Shaw to Amrit Tiwari (2008, and School Captain), and many in between from the eras of Rectors Goddard and Gibbs, through the 1970's to the present. President Ken Pearce then spoke. Ken had been to St Paul's in January, met the Chaplain and Administrator Joy Halder and Senior Master Ricardo Soler, and he gave us a short update on St Paul's and Darjeeling.

The Bombay Brasserie, as usual, rose to the occasion. From the introductory drink, the tempting starters, the selection of delicious dishes from the buffet, to the desserts and coffee, it was a memorable meal. Conversations, reminiscences and meeting new friends continued until past 4 pm, assisted by a scrolling screen of over 350 photographs of people and places at St Paul's and Darjeeling spanning 80 years. Altogether a hectic but very enjoyable day!